How To Catch Juvenile Tarpon On Light Spinning Gear

by Paul Macinnis | How To 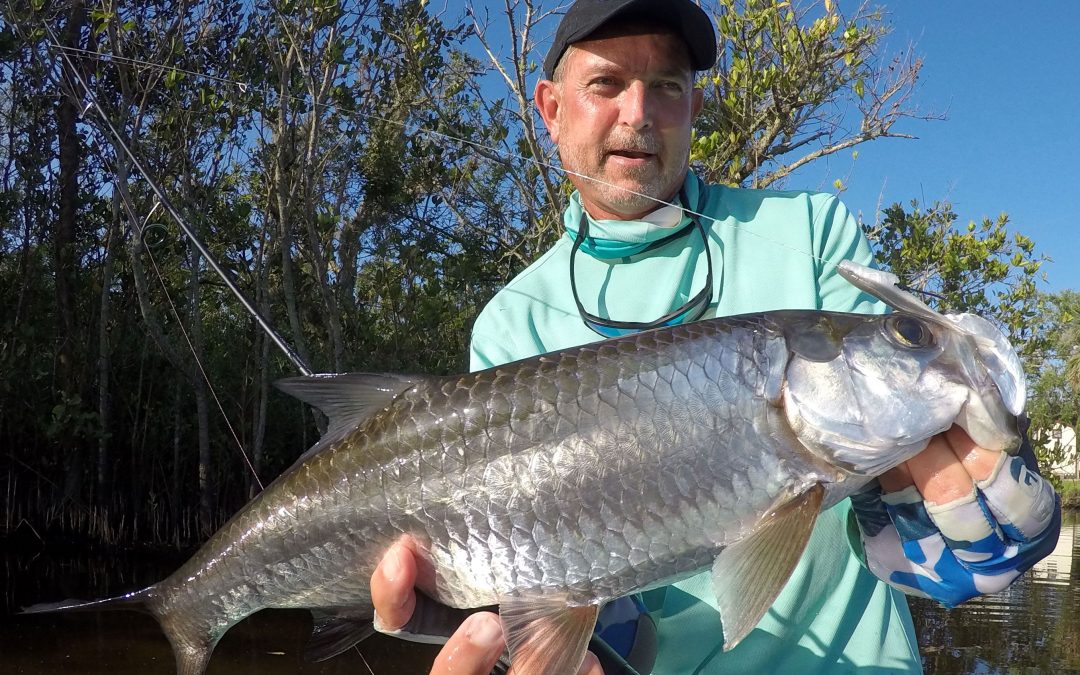 Many anglers visiting Florida hope to check tarpon off their bucket list. While the giant, chrome plated behemoths of the passes and flats are a worthy goal, there is an entirely different tarpon fishery that gets almost zero pressure and is loaded with cooperative fish. From about central Florida south, both coasts are dotted with nursery areas where young tarpon spend the first one to three years of their lives. They are an ideal size for light tackle, usually running a couple pounds up to fifteen or so. Juvenile tarpon may lack the bulk of their ocean running cousins, but they make up for it in pure numbers and a cooperative, aggressive attitude. It’s not uncommon to jump dozens of these fish in a single trip, with landings that can reach double digits.

Before we proceed, let’s talk a little about the early life stages of tarpon as it sheds key insights on where to find these fish and how to catch them. It all starts on the new and full moons between April and August when adult tarpon congregate offshore, beyond the continental shelf, to spawn. After two to three days, fertilized eggs hatch into ¼ inch long larvae call leptocephalus. The hatchlings look nothing like tarpon, or even fish. The flat, translucent, eel-like larvae sport a fearsome set of fangs making them resemble a Chinese dragon.

Now here is the amazing part. The tiny, helpless leptocephalus uses wind, tides, ocean currents and its limited swimming ability to navigate miles of open ocean. Some larvae lucky enough to evade an almost constant barrage of hungry predators eventually reach the shore. When onshore winds combine with flood tides at night, especially moonless nights, tarpon larvae pass through inlets into coastal estuaries. The danger is far from over as a leptocephalus now has to navigate past a host of new predators as it searches out that special place it will spend the first year or two of its life.

After three to four months, leptocephali metamorphose into tiny versions of adult tarpon. Now they take advantage of a unique adaptation that is key to their survival. Tarpon can live where most other fish cannot because their swim bladder doubles as a primitive lung allowing them to extract oxygen from air they gulp from the surface when they roll. Baby tarpon use this to their advantage by seeking out creeks, ditches, and other oxygen-poor waters as a sanctuary from fishy predators that require higher levels of dissolved oxygen to survive. Baby tarpon thrive in these stagnant waters, feasting on mosquitofish, killifish and other small prey. They grow rapidly, reaching 12 to 16 inches by the end of their first year. After a year, many juvenile tarpon leave the backwaters to join their bigger brethren, but plenty stay behind for two, three or more years. 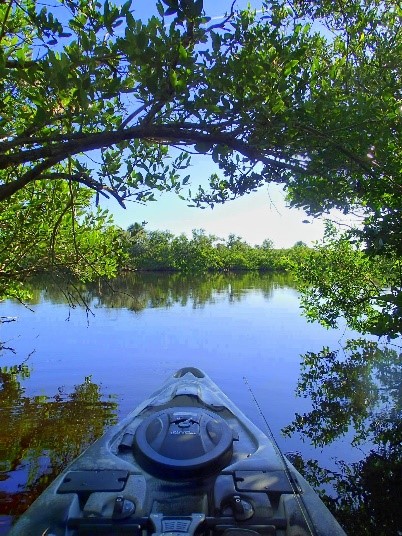 By now you should have a little idea of where to find juvenile tarpon and how to catch them.  The lush, vibrant grass flats that are frequented by seatrout and redfish are not good places to consistently find juvenile tarpon.  Websites that offer aerial images are great sources to find the creeks, canals, mangrove swamps and marsh ponds that might hold tarpon.  Basically, almost any body of water within a few miles of saltwater may harbor young tarpon as long as there is a canal, creek, culvert pipe or ditch that connects them to saltwater.

Once you’ve identified potential tarpon spots it’s time to get out and explore.  The nice thing about juvenile tarpon is they are a fish that doesn’t hide.  If you are patient and there are tarpon around, they will eventually reveal themselves by rolling on the surface.  If you are lucky, dozens of tarpon will be rolling everywhere you look, or even better, they’ll be smashing minnows along the bank.

Speaking of smashing minnows, the oxygen poor waters frequented by juvenile tarpon don’t harbor many mullet, pinfish, shrimp or other typical prey species normally associated with inshore saltwater fishing.  Primary forage is mosquitofish, killifish and other minnows.  The common feature of these baitfish is they are typically a couple inches long and seldom top three inches.  This probably leads to a mistake many novice tarpon anglers make when they throw the same lures they’d use for seatrout, redfish and snook.  Baby tarpon have mouths plenty big enough to take these baits, but they are so conditioned to eating minnows that they seldom strike lures over three inches long.

Just about any lure that resembles a minnow can spark the interest of a young tarpon.  When you look at a tarpon you will notice an upward sloped mouth and big eyes mounted high on the head.  This should tip you off that tarpon are designed to ambush prey that is above them.  Generally, you want lures that run in the middle to upper parts of the water column.  Another important consideration is the tarpon’s bony mouth.  It is hard enough to keep a hook in them with all the acrobatic jumps, but add in an almost impenetrable bony mouth and you have a recipe for lots of thrown hooks.  A big single hook holds a tarpon much better than tiny treble hooks.  Two of the best lures for young tarpon are soft plastic jerk baits and swimbaits three inches long or less.  These can be rigged weedless on a bass worm hook, but hookup percentages are better if you thread them onto a straight shank J-hook with the hook point exposed.  Lightweight jigs also work as do slim profile plugs like floating diving minnow plugs or twitchbaits.  Try to keep all these lures under three inches long and swap out the treble hooks with singles on the plugs for better hookups. 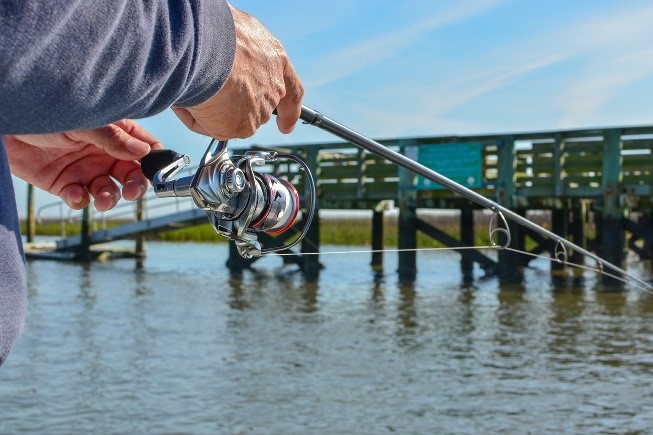 You’ll need fairly light tackle to cast these small lures. Don’t worry about being under-gunned. Tarpon don’t dive for cover like snook and they live in confined waters where long runs are not possible. They are strong fish, but frequent jumps tire them out.

A seven-foot medium light rod with a 2000 size spinning reel spooled with 8-pound braid will get the job done. A Cadence CS7-2000 reel matched with a CR5-701S-MLF rod makes for a sweet juvenile tarpon setup. If the tarpon happen to be running particularly small, like under a couple pounds, break out the ultralight gear, like a Cadence CC5-1000-56UL and have a blast. A couple feet of 20-pound test fluorocarbon leader at the end of you line will resist abrasion from the tarpons sandpaper jaws, although bump up to 30 pound if tarpon over 10 pounds are around.

Although juvenile tarpon are plentiful and aggressive, it doesn’t mean they are easy to catch.  This is a fish that really rewards those who can make quick, accurate casts.  You might get a bite now and then by blind casting, but the most successful tarpon anglers wait patiently and then fire off quick cast to fish they see roll.   Try to lead them by a couple of feet.  If you can’t tell which direction they are moving, watch for bubbles.  Tarpon will often “burp” after they roll, releasing bubbles that reveal their location.

Once you get one to eat, landing a tarpon is far from certain.  These fish seem to spend more time in the air than in the water.  A lot of them will throw the hook.  It’s just part of the game, but if you play the game well, you will get plenty of opportunities to land a few.

You will need a saltwater fishing license to fish for tarpon in Florida.  It is strictly a catch and release fishery, and possession of a tarpon is illegal except in unique circumstances like anglers with special permits seeking IGFA world records.  You may lift small tarpon out of the water for a quick photo, but state regulations dictate tarpon over 40 inches long must remain in the water.  For a complete list of Florida tarpon regulations visit https://myfwc.com/fishing/saltwater/recreational/tarpon/ .